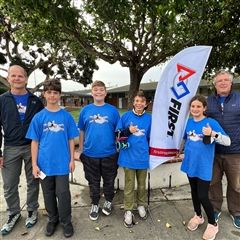 12/8/2022
The SBMS Lego Robotics Team, the πRats, won the First Lego League Regional Championships on December 3, 2022.
The SBMS Lego Robotics Team, the πRats (PiRats), traveled to Ventura on December 3rd to compete in the First Lego League Regional Championships. With 29 teams from around Southern California participating, the competition was tough, but at the end of the day, the πRats came in first place and were crowned the Regional Tournament Champions. This was a well-deserved first for the SBMS team. They put in over 40 hours of work since their qualifying tournament and their hard work and passion for the project was rewarded. They are already working on plans for their next competition in Riverside on Dec 17. Congratulations πRats!
Back
Santa Barbara Middle School cultivates in our students passion for life and life-long learning, a deep sense of trust in themselves, strength and courage to succeed at life's challenges, and compassion and respect for others.
Santa Barbara Middle School ● 1321 Alameda Padre Serra ● Santa Barbara, CA 93103
Tel: 805-682-2989 ● office@sbms.org